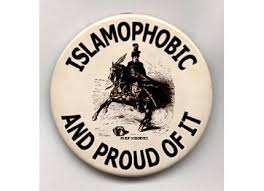 The following was written in response to an Islamophobic Christian’s ramblings on the incarceration of a woman in Pakistan under ‘draconian blasphemy laws’. I do not necessarily agree with the views therein:

How sad, you see, when Muslims talk about hundreds of years of peaceful rule in places like Andalusia and the Ottoman empire you losers bring up individual cases of (usually) Christians (cos that’s the only minority you really care about). First of all, have you conducted some kind of judicial review of these incidents or something? How do you know for sure that it is blatant victimisation? Are you sure you are not just pouncing when an apparent miscarriage of justice plays to your preconceived bias?

So what if certain minorities have had a hard time in so called Muslim nations? What are Christian majority countries doing to their minorities, Muslim and otherwise? And by the way, which are the ‘Christian’ values nations? Perhaps the United States, (slavery, genocide in SE Asia, Jim Crow, internment of Japanese Americans, Hiroshima, Nagasaki, blah blah), or the U.K (British Empire, nuff said) or is it Germany (don’t go there! At least the Christian authorities like the Vatican stood up for the rights of the Jews…oh wait, they didn’t), France (banning veils, ethnically cleansing Romany people). Not to mention the hundreds of violent attacks on Muslims and other minorities like asylum seekers that go on in these countries. DAILY.

You show what a prejudiced idiot you are by worrying about the sad fate of one Christian woman and ignoring the tens of thousands of casualties that the US and other’s are inflicting on Muslims in South Asia etc. I could point to numerous acts of physical violence and even murder in places like the UK against people of Muslim background. Does that then condemn Christians? Of course not, Use your brain, a life is a life, weather it’s Christian or Muslim or whatever, You don’t deserve more props for getting persecuted just cos you are a Christian. Injustice is bad WHOEVER it happens to.

It just so happens that the balance of injustice at the moment is that it is being disproportionately inflicted on the Muslims (and other poor countries) by the European extraction nations that you no doubt identify as ‘Christian’.

750,00 Muslims killed in Afghanistan by ‘Christian’ troops and you’re worried about the incarceration of ONE woman in Pakistan. And you won’t even wait for a court to decide if there’s a case to answer before saying she is innocent.

And don’t pretend like you are for the rights of gays and women. We know what the Old (& New) Testament says about those two groups (you know, the same Old Testament that Paul said was good for preaching and action). Your homophobia in Islamic countries is a figment of your own imagination. We decriminalised homosexuality in 1862 in the Ottoman Empire (Caliphate). When did you decriminalise it? What does the Pope say about it?

And while we are at it, try and read a book for once in your life and find out how Christianity was spread through Pagan Europe by people like King Cnut and numerous others. By violence. Naked violence. Like that’s what Christ taught. How did you guys try to spread Christianity in the Holy Land? A little camping trip organised by the Church called the Crusades, so bloody that they even killed Christians. And we won’t even talk about the Spanish Inquisition. Or the Inquisition in the New World. Or the Philippines, where again, Christianity was spread by force. Oh and in what is now Pakistan, where the missionaries came in on the heels of a violent and rapine colonialist enterprise.

Perhaps you should look at how various Christian denominations treated ‘heresy’ before you talk about the apostasy law in Islam.

And don’t try to make it out that Muslims are racist when our religious book condemns not only racism but colour bias WITHIN races (Surah Ar – Rum). What does the Bible say about racism? (apart from condoning it in the Old Testament in the way the Philistines are treated). NOTHING OF NOTE (oh it does say that God will give you the ‘Heathen for thine inheritance’:

‘Ask of me, and I shall give [thee] the heathen [for] thine inheritance, and the uttermost parts of the earth [for] thy possession’.

What is sad is that you are too dumb to think of this lame stuff yourself and got it all from those extremist Christian websites, written by people even dumber than you.

Things go downhill in a hurry when the Christian accuses Islam of being a bloody religion that encourages violence slavery blah blah:

As for all the killings by Muslims, if you put them all together and compare them just to the war in Iraq, prosecuted by Christians, they pale into insignificance, Boko Haram, 9/11, whatever, because you fine Christian soldiers have killed hundreds of thousands of people by war and hundreds of thousands before that by sanctions. No Muslim group, including Al Qaeda even comes close.

As for slavery, tell me where Jesus ever condemned it or said anything against it in the NT? As for the Bible:

Leviticus 22:10 “‘No one outside a priest’s family may eat the sacred offering, nor may the guest of a priest or his hired worker eat it. 11 But if a priest buys a slave with money, or if slaves are born in his household, they may eat his food.”

Even the priests had slaves! And why did Jesus not say anything about this?

”Avery Robert Dulles points out that “Jesus, though he repeatedly denounced sin as a kind of moral slavery, said not a word against slavery as a social institution”, and adds that the writers of the New Testament did not oppose slavery either.”

Titus 2: 9 -10 “Tell slaves to be submissive to their masters and to give satisfaction in every respect; they are not to talk back, not to pilfer, but to show complete and perfect fidelity, so that in everything they may be an ornament to the doctrine of God our Savior.”

Although we as Muslims honour Jesus (PBUH) and believe that he DID take steps to emancipate the slaves, just like Muhammad (PBUH). We won’t sink to your degenerate level by attacking Christ.

Oh and you want to talk about Moses and the Ten Commandments? I guess you follow then the lies the Bible tells about Moses (PBUH):

Numbers 31:13 Moses, Eleazar the priest and all the leaders of the community went to meet them outside the camp. 14 Moses was angry with the officers of the army—the commanders of thousands and commanders of hundreds—who returned from the battle.

15 “Have you allowed all the women to live?” he asked them. 16 “They were the ones who followed Balaam’s advice and enticed the Israelites to be unfaithful to the LORD in the Peor incident, so that a plague struck the LORD’s people. 17 Now kill all the boys. And kill every woman who has slept with a man, 18 but save for yourselves every girl who has never slept with a man.

Hmmm…such a peaceful religion. massacring women and then taking them…for what? Slaves? Sex slaves? So peaceful. So loving. And you want to accuse Muslims of wanting ’72 virgins’! At least the Muslims wait for their ‘virgins’ in the next world! Sheesh, have some patience guys!

But what does Jesus say about the OT (allegedly, for we know Jesus would never support such evil, and neither would Moses)

Oh dear, maybe Paul will save you and condemn the OT teachings:

2 Timothy 3:16-17 “All Scripture is given by inspiration of God, and is profitable for doctrine, for reproof, for correction, for instruction in righteousness, that the man of God may be complete, thoroughly equipped for every good work.”

Or maybe not. I guess massacring women and enslaving the survivors is ‘instruction in righteousness’

Oh and the worst thing, since ‘God’ allegedly ordered these massacres and Jesus is supposed to have been with God forever (as the Christians claim he IS God: ”In the Beginning was the Word…”) then presumably he APPROVED this instruction to Moses…(although we as Muslims do not accuse Jesus or Moses of such hideous acts). Oh dear, and you want to talk about violence in the Quraan?

I think you messed up.