Violence In Islam (Or: ‘Chuck Connors and ISIS, The Cult of Doom’) 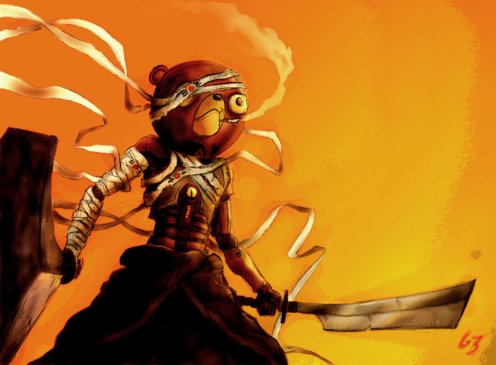 My beloved Heuristically Algorithmic teddy, ‘Kuma’, has recently discovered the internet. I let her surf it because she is bored at home while I go out and fight evil as my alter ego ‘Gonzaburo, The Unseen Hand of Justice’. Sadly, she has come across a lot of inaccurate information about her favourite topic – theology. And more specifically, Islam.

Last week, Chuck Connors prevented Kuma from leaving Islam due to doubts she had acquired from visiting sites claiming to find scientific errors in the Quran. Unfortunately, Connors did such a good job that in her new found zeal for her religion, Kuma has been visiting dodgy Salafi and ‘Islamist’ websites and has become interested in joining violent Jihadis such as ‘ISIS’.

I had to call in Connors, who recently offered £10,000 to anyone who could prove that the Quran was ‘violent’ (as well as challenging ISIS recruits to a fist-fight to underline the condemnation of what he considers to be a heretical or extra-Islamic movement i.e violent Salafism:https://asharisassemble.com/2014/10/31/muslim-polymath-chuck-connors-challenges-isis-to-fistfight-at-inter-faith-event-and-then-offers-5000-to-anyone-who-can-prove-the-quran-is-violent/) to try and de-radicalise my poor teddy, before I have to report her to the authorities.

I am happy to report that he once again succeeded in talking her off of a cliff and prevented her becoming a ‘jihadi bride’.

And please Kuma don’t be so gullible – you don’t see ‘Hello Kitty’ doing dumb shit like this!

Mahmut ‘Chuck’ Connors was sent to a traditional Islamic Madrasah at the age of ten. He memorised the whole Quran, studied classical Arabic, Tafseer (exegesis of the Quran), Shatibiyyah (different types of recitation), Fiqh (jurisprudence), Hadith, Mantiq (logic) and Kalaam (Islamic philosophy and creed) for the next decade.

In a complete change of tac, he then gained BSc’s in both Molecular Biology and Mathematics and Astrophysics as well as an MSc in Theoretical Physics from Kings College London.

He is currently researching Black Hole thermodynamics for his PhD.

12 thoughts on “Violence In Islam (Or: ‘Chuck Connors and ISIS, The Cult of Doom’)”