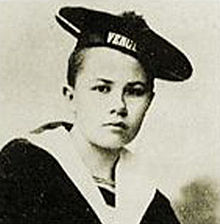 Isabelle Eberhardt (17 February 1877 – 21 October 1904) was a Swiss explorer and writer. Born into an aristocratic family, she and her mother converted to Islam and she pursued the Sufi path. Amongst other works, she wrote ‘In the Shadow Of Islam’ before dying young at the age of twenty – seven.

Her life has also been adapted into a 1991 film (which I haven’t seen unfortunately – reviews welcome!).

Selected passages from  ‘In The Shadow Of Islam’:

– ”Owing to times like these, I carry families, hearths and campfires in my memory. In hours of isolation and daydream, they all come back for the duration of a smoke, and these memories are a more bracing tonic for me than those of former enthusiasms (followed by depressions), or than hopes invested in persons that finish always, almost always, in disillusionment and bankruptcy.

This has led me to the conclusion that we should never seek happiness. Along the way it sometimes visits, but always through an inversion. At times I have even recognised it”.

‘But I know still other songs distant friend, lullabies so sweet and charming that, if you were singing them to your little beloved, she would snort with laughter at you, for your little beloved has never had fever. She knows only how to admire herself in a pocket mirror, fluttering her eyelashes and pursing her lips.

What’s more she has luxuriant hair and the loveliest smile in the world, an intelligent smile. Her understanding is all an act. When her eyes roll back in ecstasy and her eyelids are creased and ringed in blue don’t go believing that she loves you, it is just a little tremor of egoism surfacing.

And why should she love you? You whose love, like mine, is nothing but a passionate endurance whereas hers is a light-hearted joy? Therefore sing to her, to make her smile, lullabies composed for other idols that resemble her.”

– He said to me ‘Listen to this Egyptian song.’ And then it was his eyes that spoke to me, yes, nothing but his mortal eyes:

‘Before the threat of the Indian sword my gaze is always steady. – Before the gleam of my beloved’s dark eyes, my gaze is troubled and forced to Earth.

Like the eye of the eagle, my eyes have never been dazzled by the sun. – The face of my beloved has muddled my reason and my sight.’