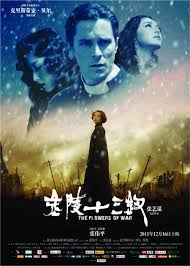 These two big – budget Chinese productions, released in the past year, share a lot in common: a WWII setting, the presence of Oscar winning foreign leading men (Christian Bale and Adrien Brody/Tim Robbins respectively), massive box office success (domestically at least), excellent production values, as well as the virtue of having been directed by inarguably the two most recognised and successful mainland Chinese directors: Zhang Yimou (best know outside China for ‘Hero’ and ‘House of the Flying Daggers’) and Feng Xiaogeng (‘Assembly’, ‘A world Without Thieves’).

They also feature something else in common which even the casual observer cannot help but notice: a sympathetic portrayal of Christianity and indeed even of the Church.

Why is this interesting? Well, with the rise of China soon to become the ascent of China, arguably everything about China is interesting at the moment. However, in the context of China, like other countries influenced by Communist ideologies, having had various campaigns against religion, as well as having the largest number of atheists in the world (http://www.thechapmans.nl/news/Atheist.pdf), it is perhaps not what we would expect.

Further, neither director is particularly a critic of the state and one has directed a film which arguably served as ‘Communist parable’ (Xiaogeng’s ‘A World Without Thieves’). Would it not be going out on a limb to depict religion at all? Why would directors with such great local approval (Yimou even directed the opening ceremony of the Beijing games) take such a risk if Christianity was proscribed as missionary groups like to say it is? Would it not annoy the Party Elite?

Given that it is inconceivable that religions such as Buddhism and Islam would be portrayed at all, let alone sympathetically in such big budget productions despite being, at least until recently, more firmly established in China than Christianity, it makes the central role played by that religion in these films even more difficult to understand. ‘Back to 1942’ even features Tim Robbins waxing lyrical about Christian theodicy and ‘Flowers of War’ features nothing less blatant than Chinese prostitutes being co-opted into a choir! It’s all a bit ‘on the nose’ in terms of ‘rehabilitating’ Christianity for Chinese consumption, and prompts the questions of why would these luminaries feel confident to portray Christians thus if they feared the Party and it’s notorious film censors (even Yimou had a film banned early in his career) and do Christian missionary accounts of the hardships their brethren face in China hold water? One answer is that there is nothing to be afraid of and Christianity may be enjoying a certain level of state sanction, whereas the accounts of persecutions, though perhaps true, find utility in fundraising for Chinese missions amongst western congregations.

Then there is this news that China is one of the world’s largest publishers of Bibles:

It would indeed be strange if Muslims enjoyed sympathetic, even polemical portrayals in blockbuster Chinese movies and the largest Quran distribution network in the world was in China and they yet complained of ‘harsh’ restrictions against Islam. No-one would buy that story. So just how strained are Christian activities in China?

Christians, perhaps having a bit of a persecution complex from hearing all of those stories about Christians being thrown to the lions by pagans (whereas for most of history, including that of early Christianity in Europe from Constantine onward, it was the other way round), will no doubt harp on about difficulties still faced by Christians in China, and no doubt many of these are real. But when one asks for the specific restrictions one finds specifics are thin on the ground, unless one turns to impossible to verify evangelical websites trying to raise funds from Western countries, most particularly the United States. However, Christians in China, unlike Muslims or Buddhists enjoy protection and representation from China’s important trade partners such as the U.S or Europe. And they aren’t exactly immolating themselves or having razor wires inserted into unspeakable places as Amnesty International claims Muslims are (1).

I would suggest that the Chinese Party Planners, well known for their very long range thinking (a la Deng Xiopeng, who put China on it’s current road to prosperity way back in the 70’s) are giving a preferential status to Christianity to fill a possible ideological vacuum in any ‘post – Communist’ society that emerges in the New China. Christianity’s alleged secularism, especially as interpreted by the Protestant variety (‘give unto Caesar’) with it’s emphasis on salvation by faith alone (actions, dietary requirements, politics be damned) make it a far more attractive alternative to the secular faith of Communism, which is now ideologically disappearing from the ‘new’ China. The affectionate and accommodating attitude shown to Christianity by the top Chinese film-makers should perhaps be seen in this more ‘nation building’ perspective.

Alternatively, it’s just a narrative choice in these films and means nothing.

But  if anyone doubts the possibility of the Chinese authorities co-opting of Christianity on pragmatic grounds, recall Deng Xiaoping’s response when asked about differing economic models: ‘Who cares if it’s a black cat or a white cat, as long as it catches mice?’ (paraphrase)

No doubt large numbers of people are converting to Christianity in China, largely due to the liberalisation of access for missionary groups and the romanticised notions with which Christianity is often related to ‘Western’ Civilization in Asian countries in general, but this freedom does not seem to extend to other religions. Nor do those other religions have powerful E.U and U.S contingents lobbying for them.

It will be interesting to see if Christians in China use their apparent preferred status to help other groups, for example Muslims, to gain more freedoms. If the near complete absence of support from Christians locally and globally in the matters of the French Hijaab ban, Italian and Spanish mosque building restriction, Swiss minaret ban etc. are anything to go by, don’t hold your breath. From the Mongol invasions (where Christian princes and converts egged on the Baghdad genocide) (2) to the Holocaust, Christian organisations don’t have a great record of upholding the rights of other religious communities.

(2) ‘The Christian powers both of the East and the West looked to the Mongols to assist them in their wars against the Musalmans. It was Hayton, the Christian king of Armenia, who was mainly instrumental in persuading Mangu Khan to despatch the expedition that sacked Baghdad under the leadership of Hulagu, the favour of whose Christian wife led him to show much favour to the Christians’ Arnold, ‘The Preaching Of Islam’ p.221.