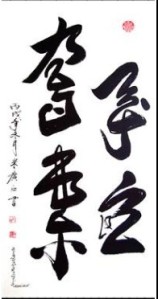 Oh no! Writing ‘Bismillah’ in Chinese is Bidat! We’re doomed!

Another, rather idiotic, idea that the Deobandis in particular used to insist on, in the U.K at least, was that if one wore clothes other than those of Muslims or the Prophet (SAW), one was imitating the kuffar and thus ‘one of them’ (in a corruption of the Hadith which mentions that whoever imitates a people is one of them).

They used this deviation to insist that the wearing of jeans, amongst other things, fell into this category and was haraam (!). This was part of their ‘BIDAT FEST’ mentality, which they no doubt contracted from the Salafis (where everything is a bad innovation, no matter how innocuous).

Fortunately they have moderated their stupidity on this and other issues as the years have gone by (at least in the U.K), though one fears this is more out of fear of censure than genuine change of principle.

Below is a list of ‘foreign’ items of clothing in the Prophets’ (SAW) possession. Many if not most are from non-Muslim countries, such as Rome and Egypt.

Perhaps the Deobandis think that the Prophet (SAW) was ‘imitating’ the kuffar by wearing them.